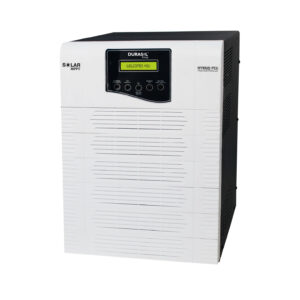 MPPT or Maximum Power Point Tracking is the algorithm that included in charge controllers used for extracting maximum available power from PV module under certain conditions. The voltage at which PV module can produce maximum power is called maximum power point (or peak power voltage). Maximum power varies with solar radiation, ambient temperature and solar cell temperature. ETG has integrated its high efficient MPPT based charge controller inside the PCU. The optimum efficiency of the Inverter section along with high efficient MPPT charge controller helps generate maximum power from the solar panels. This makes the whole solar systems give maximum output from the same systems. Working of Solar PCU When solar energy is sufficient then total o/p load will operate on solar through MPPT and inverter. Excess solar power will charge batteries When solar energy is weak then the inverter is taking DC source from solar & balance from batteries When batteries reach 75% discharge level the o/p load is shifted to the grid. After shifting load to the grid (bypass) the batteries are charged from solar energy and if solar energy is not sufficient to charge the batteries, then remaining DC power is taken from gird charges (inverter is acting as a grid charger in reverse directions so the system is called a bidirectional PCU) Once the batteries are fully charged then the load is shifted back to the inverter from the grid During the change over from inverter to grid and if grid supply is not present then again load is shifted to the inverter to use buffer battery backup. When grid returns during inverter which is working on buffer battery backup then the load is shifted to grid and batteries are charging through solar or grid as per bi-directional logic